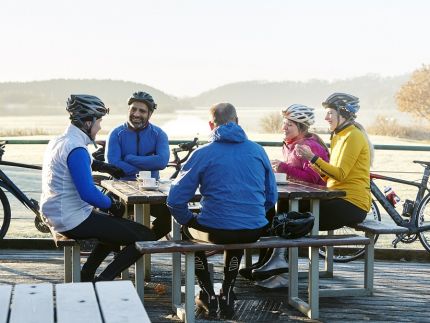 This Harrow Cyclists ride is open for anyone to join

This should be a beautiful ride, through mostly quiet country lanes, to Great Missenden, where we'll have a coffee and cake stop at the Roahl Dahl museum.

http://www.roalddahl.com/museum/cafe
"Cyclists, If you're planning a bike ride in the area, why not pop in for refreshments - the cafe is a great spot for cyclists. There's plenty of room to leave your bikes in the courtyard, lots of great coffee to keep you going, and plenty of great cycle routes nearby!"


The ride is taking place on the first day of GMT, therefore we gain an hour!, which we can spend on the bikes ;-)

The route has a fair degree of climbing, but nothing too strenuous. Average speed will be about 16 mph.

You need to bring spare tubes, levers, and a pump. Plus some food for snacking in case your energy levels dip before the midway point or the end. Also bring some cash/card for the coffee stop. A small bicycle lock might be useful.

I recommend you use a road bike for this ride; if that is not possible, then a hybrid bike with road tyres.

The route is mainly on quiet lanes, with some A and B roads. I expect to encounter very little traffic on the outbound journey and most of the return; however, when we cross the M25 on the return I expect traffic levels to be relatively high. You should be confident of riding in traffic. And in a group.

We will be cycling through Amersham on the way out, and Chesham on the way back. If you needed to you could catch the Metropolitan line back to Harrow from there. There is also a train station at Great Missenden, served by Chiltern Railways.

‘Harrow Cyclists is a branch of the London Cycling Campaign, working to improve conditions for cycling in Harrow. Our rides are led by volunteers.’