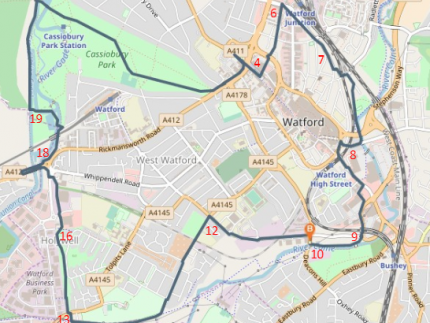 Starting from - Outside the Harvester, Baldwins Lane, Croxley, WD3 3RX

Cycle, with Roger, the proposed Watford Green Ring. See how green it is! We recognise it is already there, but it needs to signed & promoted as a benefit for all.

NB: A second ride with Peter will set off on this route 5 minutes after Roger's group leave so that as many Members as possible have the opportunity to experience this route. Some may agree to meet with members of both groups after the ride to socialise and share their thoughts on the route. Perhaps the Red House Pub Garden after the ride.

This socially distanced ride is limited to pre-booked (via Lets Ride) SPOKES Members only due to the limit on numbers. It is a medium pace ride (9-11mph average) organised by SPOKES SW Herts Cycling Group.

Want to ride with us during this number restricted period? Membership is only £12 per annum, £3 for subsequent Members in the same household. You'll find details at http://www.spokesgroup.org.uk/about/. On the same website, you will also find our calendar of planned rides.

No refreshment stop planned but group may agree to take advantage if an opportunity arises on the ride.

We never leave anyone behind